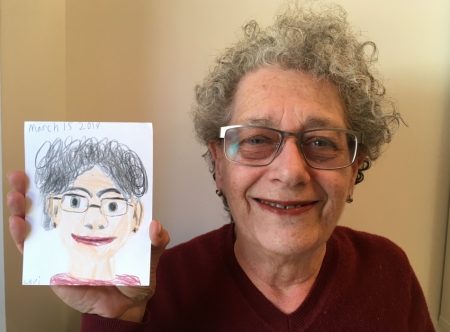 OTTAWA, ONTARIO – Winnipeg’s Ava Kobrinsky is the recipient of the Slaight Music Unsung Hero Award for the 2021 Canadian Folk Music Awards (CFMAs). The Award will be presented during the 2021 Canadian Folk Music Awards online celebrations. This year, the CFMAs are presenting all 20 awards virtually over the weekend of April 10 & 11, 2021. During this annual event, our bilingual hosts will review all the CFMA awards categories, nominees, announce recipients, and present the Slaight Unsung Hero Award, along with performances from 2021 nominees. The Awards Ceremony Show performers hail from across Canada, from NWT to PEI, and we are thrilled to present six 2021 nominees on our virtual stage nightly.

The Canadian Folk Music Awards are pleased to offer all 2021 CFMA events – from the nighttime Awards Shows to the daytime showcases and family friendly events – by voluntary donation, broadcasting around the world. The Awards Shows will be streamed via our website, folkawards.ca  on facebook and our youtube channel.

Ava is a passionate supporter of the arts who has devoted her career to establishing strong organizations that continue to sustain the Canadian folk community. As a result of her behind-the-scenes involvement, Canadian folk music artists have gained national and international recognition while countless thousands of people have been exposed to the best in Canadian music.

Ava is held in the highest esteem by everyone who knows her. She is a tireless advocate for Canadian music and a steadfast friend of Canadian artists. Her resume is one of breathtaking range and achievement as an experienced non-profit arts manager and a co-founding Board Member of the Winnipeg Folk Festival, as well as co-founder and General Manager of Home Routes/Chemin Chez Nous, among numerous other positions in the arts world.

“Add to that the ground-breaking concert tour model that Home Routes/Chemin Chez Nous has pioneered since 2007 and she is in a class of her own. Such organizations do not just appear in the world; they require vision, dedication and follow through, and Ava has been uncompromising for a generation and a half in her quest to create sustainable platforms to propel artists careers,” says Producer Jason Arkley.

“Not only that, she is also a truly kind person who carries herself with dignity and grace, and nurtures that in others around her, in whatever capacity they find themselves in her company. I believe these characteristics and ethics represent all that is good in our world and I am pleased to nominate her for the honour of the 2021 CFMA Unsung Hero.”

Ava has done so much, and all in addition to being a mother to her son, Leonard Podolak and to her melded families with Zeke and Max Preston –  and supporting Mitch Podolak, her husband of 48 years (1971-2019) in his work at Winnipeg Folk Festival, Winnipeg International Children’s Festival, Vancouver Folk Festival, Edmonton Folk Festival,  Calgary Folk Festival, Walnut StreetMusic, and Home Routes/Chemin Chez Nous.

Following is the link to the Winnipeg Arts Council’s website with Di Brandt’s poem about Ava Kobrinsky. http://winnipegarts.ca/wac/newsarticle/in-praise-of-ava

About the Unsung Hero Award

This annual legacy category award recognizes the exceptional contribution of an individual, group, or organization to any aspect of the Canadian Folk music scene.

Nominees must be perceived as an “unsung hero;” someone who has received little in the way of national and/or public recognition for their accomplishments. The Slaight Music Unsung Hero category nomination process accepts public nominations for this category each year and is judged by the board of the Canadian Folk Music Awards. Complete details are online at http://folkawards.ca/eligibility/unsung-hero-award.

The CFMAs gratefully acknowledge the financial funding support of FACTOR through the Government of Canada and Canada’s Private Radio Broadcasters.